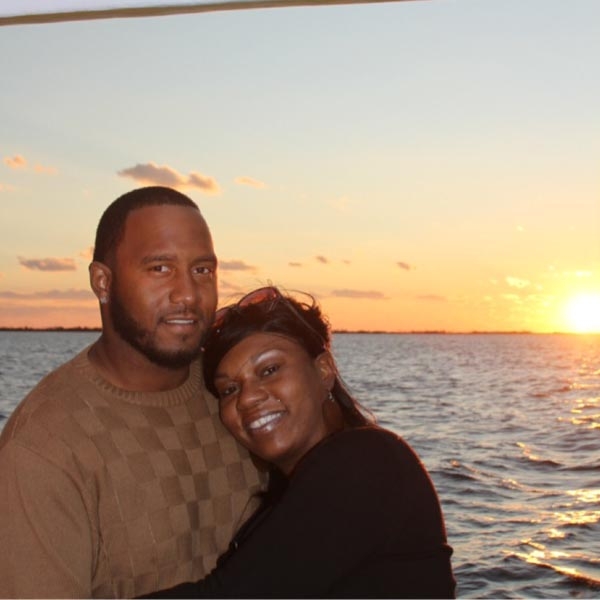 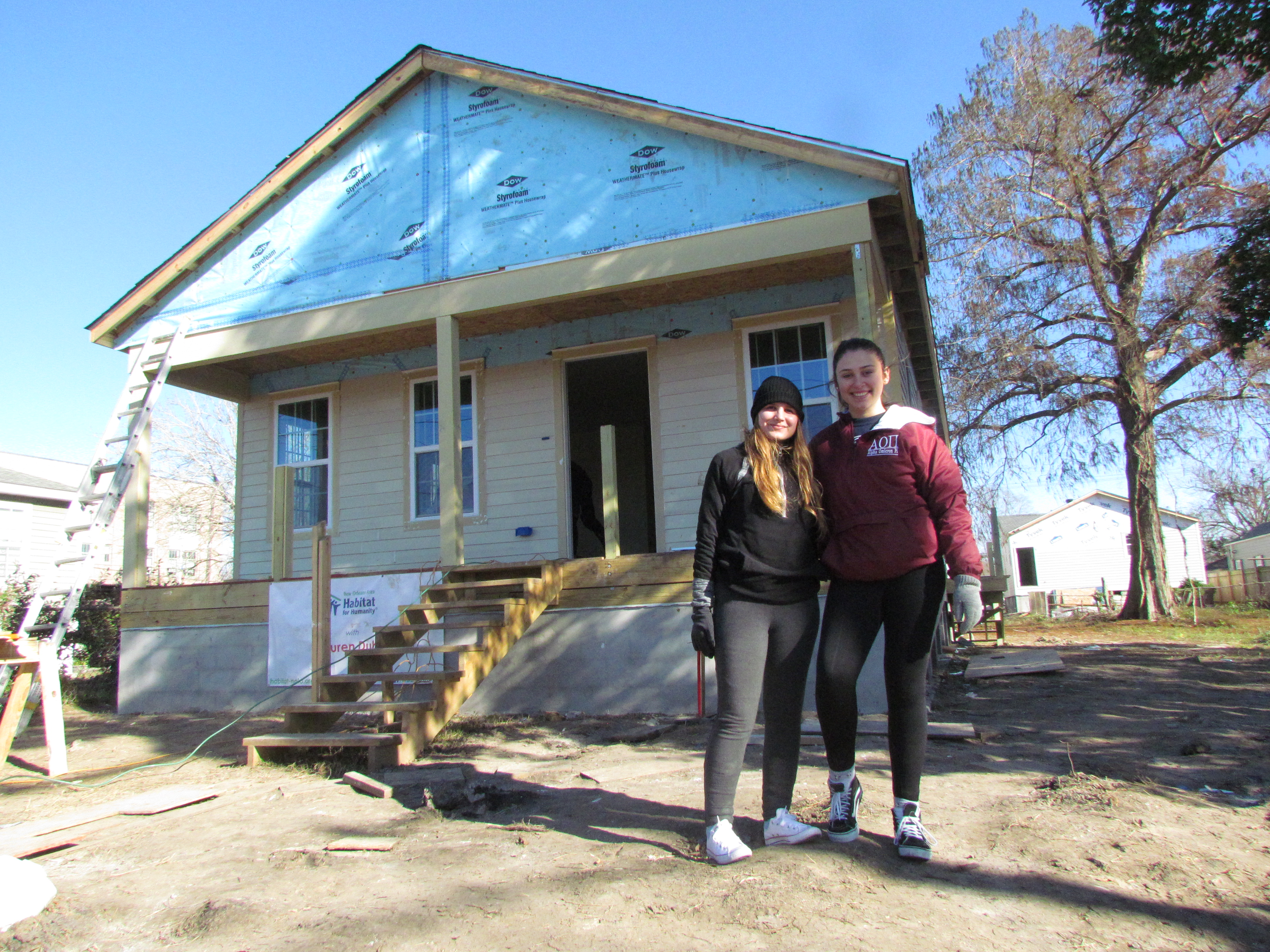 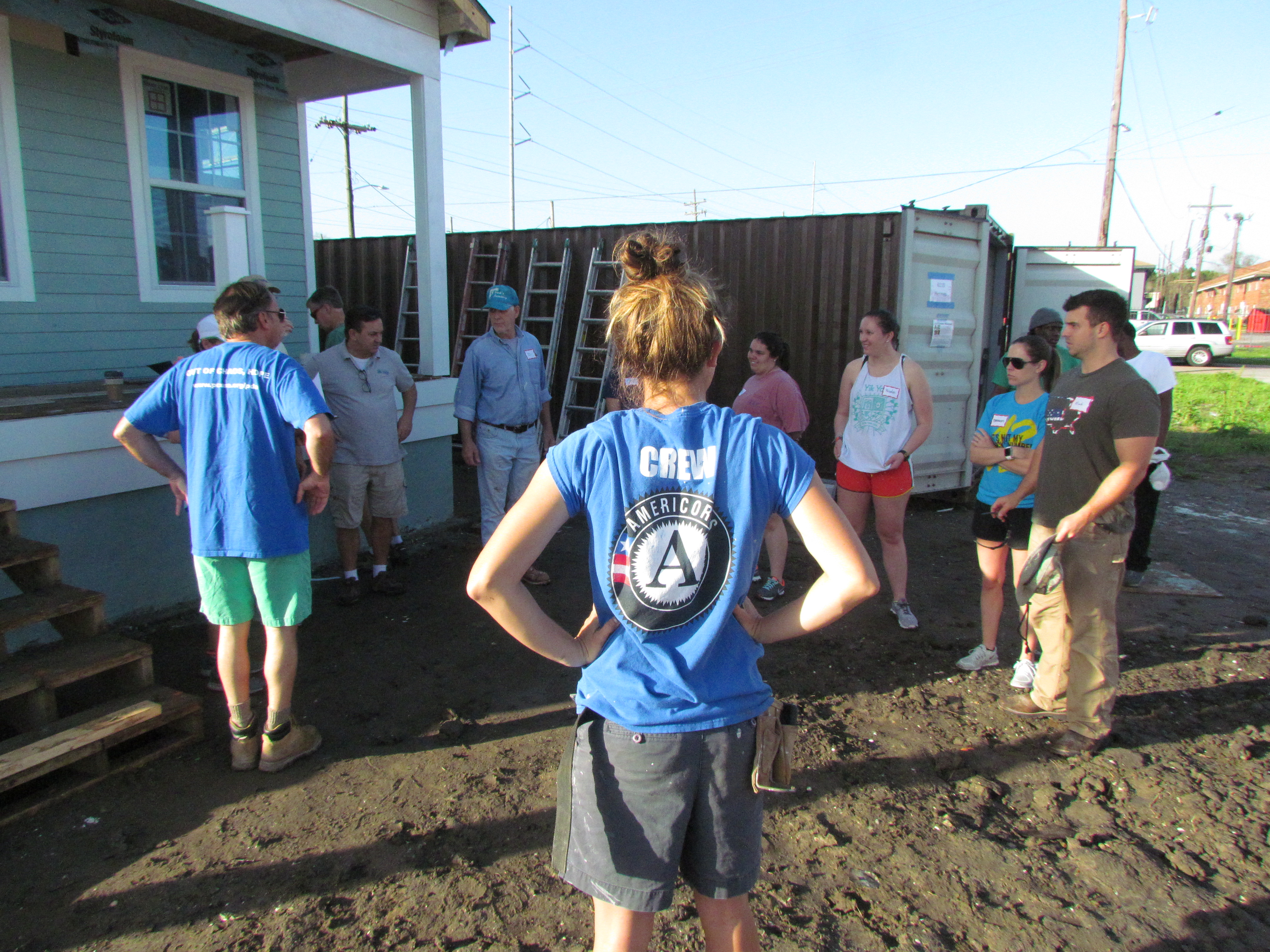 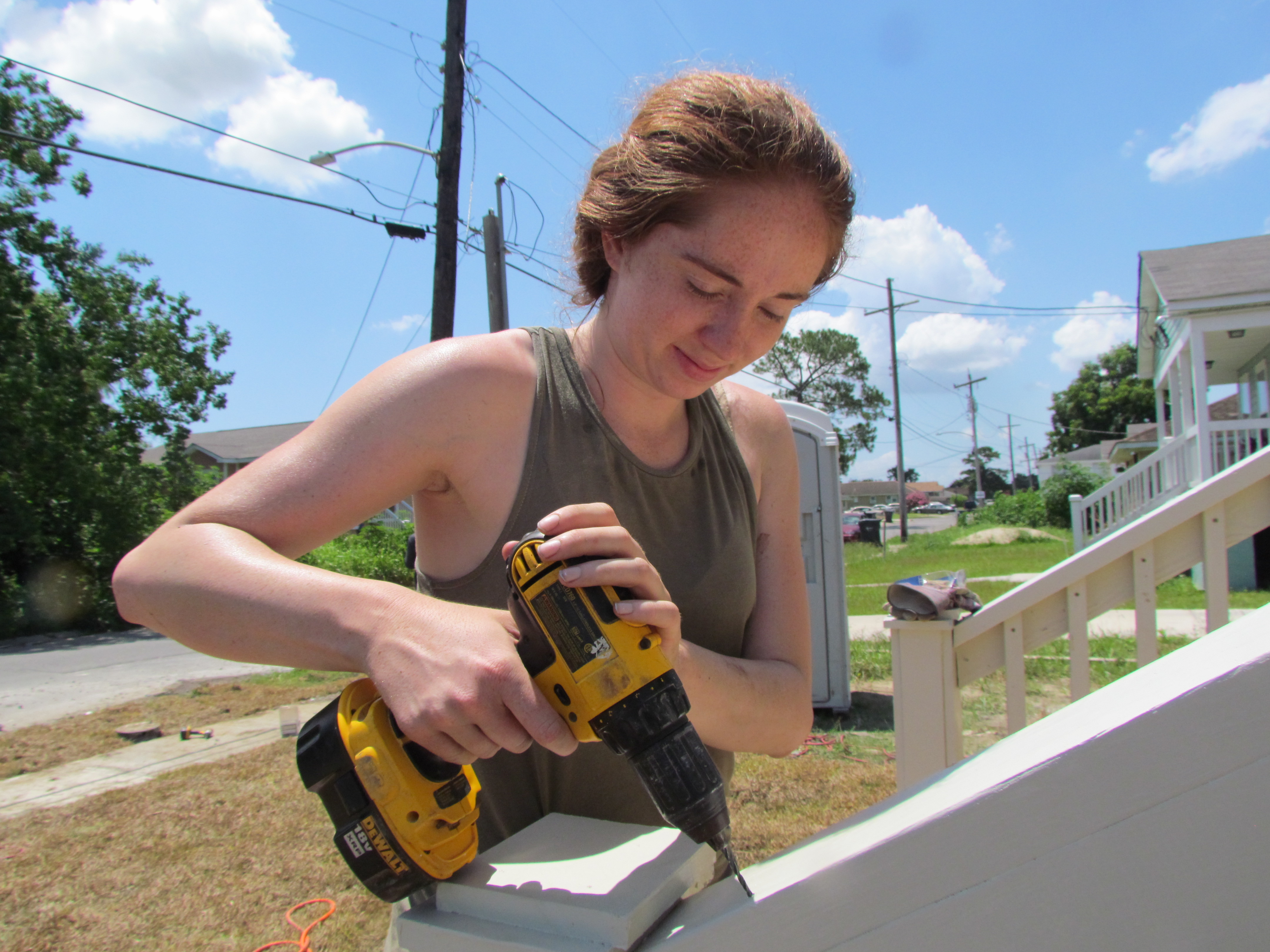 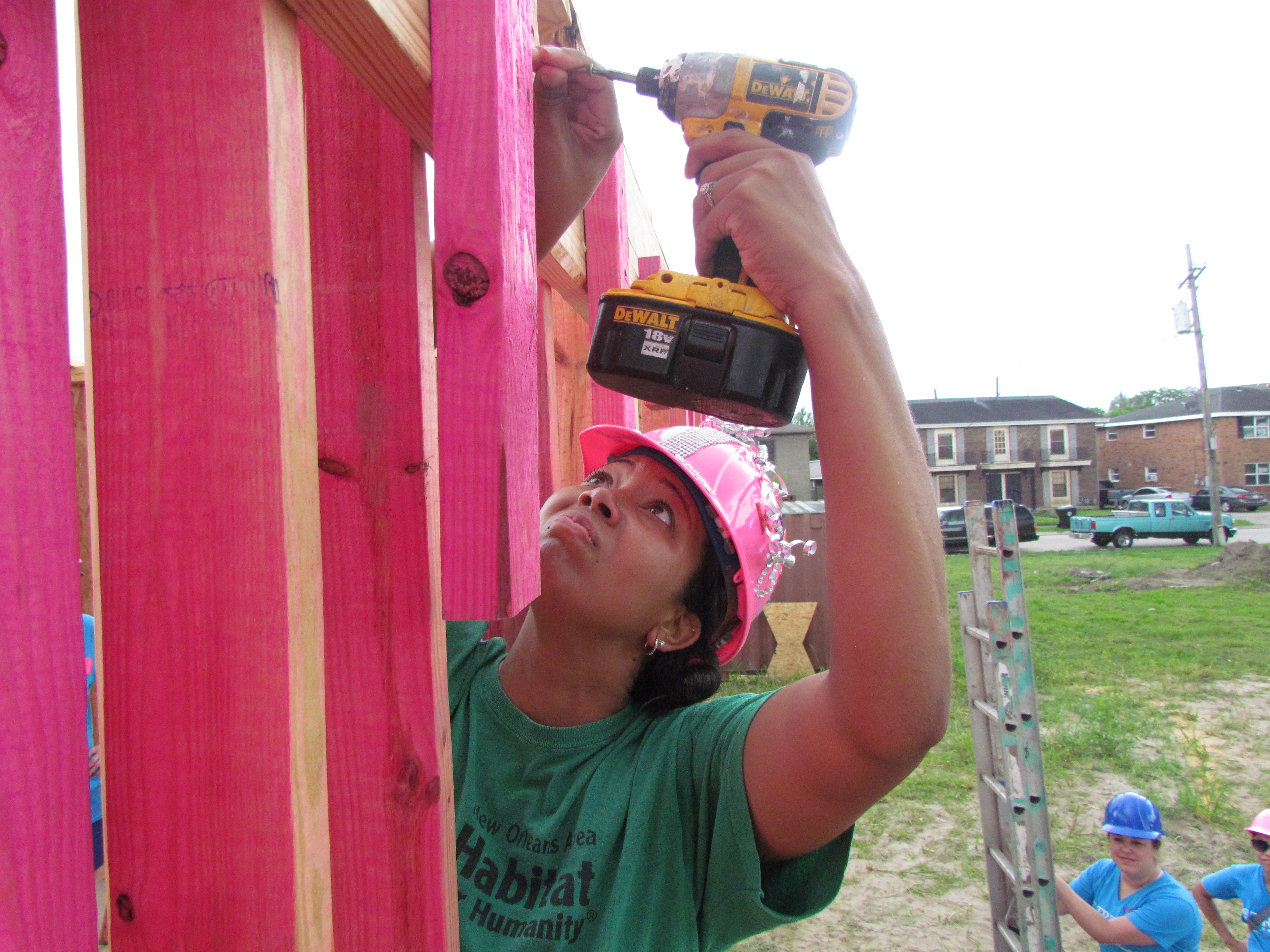 “Home means family. Whether it’s 3-bedroom, 1-bedroom, a studio, whatever it is, if you have your family there, and you can shelter them and provide that, then that’s what home means.” – Angela Latino, Women Build Team Leader

Women Build is a celebration. NOAHH is bringing women from all over New Orleans, from all backgrounds, all zip codes, to celebrate how much women have contributed to the mission to support affordable housing in our city. Our opening weekend over 100 women, including volunteers, sponsors, staff, and partner families, took the home of Monica Grandpre from floor system to dried-in (meaning the roof and walls were up) in just three days. On the second day of the build, women from three local construction organizations (Triton Stone, Associated Builders and Contractors Bayou Chapter, and Colmex Construction) and friends helped Monica put a roof on her future home (despite a thunderstorm or two).

“It makes it feel special that actually she’s here,” said Angela Rivera, President of Colmex Construction, “and the fact that she can see what people are doing for her, what the community is doing for her, and she can see how everything’s progressing. I think that’s beautiful.”

“I think that’s the investment, that that’s the part of taking the ownership, not just in owning the home, but building it and building your community,” said Angela Latino of ABC Bayou Chapter. “So that’s the beauty of Habitat. ABC has been part of Habitat for Humanity for many many years; I know every day, Habitat for Humanity and ABC work together in many different ways. This was just a fun opportunity with Women Build. As they say, ‘girls play house, women build homes.’ I like to think so anyway.”

Angelica’s team had an unexpected connection to Habitat. Team member Toni Dixon joined her team, but did not let Angelica know until the day of the build that she is a Habitat homeowner.

“She was the youngest homeowner with the affiliate at the time,” said Angelica. “She was really happy when I told her to come and help. She told me today she was a homeowner. When she came this morning, she said, ‘You know, I got my house in 2003.’ It’s great.”

Toni worked alongside Monica, whose home is being built during Women Build, and Lauren Duhe, a new partner family who came out for her first day of sweat equity. Their presence showed the lasting impact of NOAHH. Since NOAHH’s founding, 70% of our partner families have been single women (many of them single mothers), and 21% have been couples, meaning 91% of NOAHH homes have helped women and their families.

Angelica, Angela, and Mikelle Fagan each brought women from their organizations and companies to join them on site. As leaders in the construction field, they each had a perspective on working jobs usually associated with men.

“Initially it was really difficult to be [a woman in construction],” said Angelica. “There were times where there were 20 guys in a meeting and me. Initially, it was very different. I think now, we have an opportunity, since we created goodwill, and people know us as a good company. That’s something we focus a lot on. We try to go to every single house that we build at the end and make sure everything is done correctly.”

“It’ll help once the house is completed,” said Mikelle. “It’ll help the men realize that we can do it. Honestly, I think that using a group of women is much more organized.”

Their individual experiences made Women Build appealing, but they were also motivated by their desire to give back and to do some team-building.

“I don’t often get out and swing a hammer,” said Angela, “so I jumped at the chance when we learned about this Women Build project. Just said, ‘Yep, we need to do it.’ So the full staff is out here from our chapter, and several of our members joined us today.”

“This was a beautiful opportunity to give back to the community and be able to help a woman that’s amazing,” said Angelica. “We are thrilled to be here, and because we’re a construction company, this is something we do. It’s pretty good to see and to be where your employees are, not only helping someone but understanding what they’re doing on site every day.”

“We had been talking about it,” said Mikelle. “We definitely wanted to do something to help the community. We are a woman-owned and operated company, so we’re kinda shut down for the day. There’s only four guys there. We thought it would be a perfect pairing.”

For Angela, though, this was not her first Women Build. Shortly after Hurricane Katrina, she worked with the North Shore affiliate as director of development and helped with their Women Build events.

“It was very similar,” said Angela. “It’s a great organization. You see the community come together for those who’re trying to build their lives. I’m sorta a native New Orleanian now, so I’m very glad to be able to do it on this side of the lake now.”